Low-lying volumes topped with overhanging roofs form this holiday home in the Pacific Northwest, which was designed by US studio Wittman Estes for a family of impassioned naturalists. 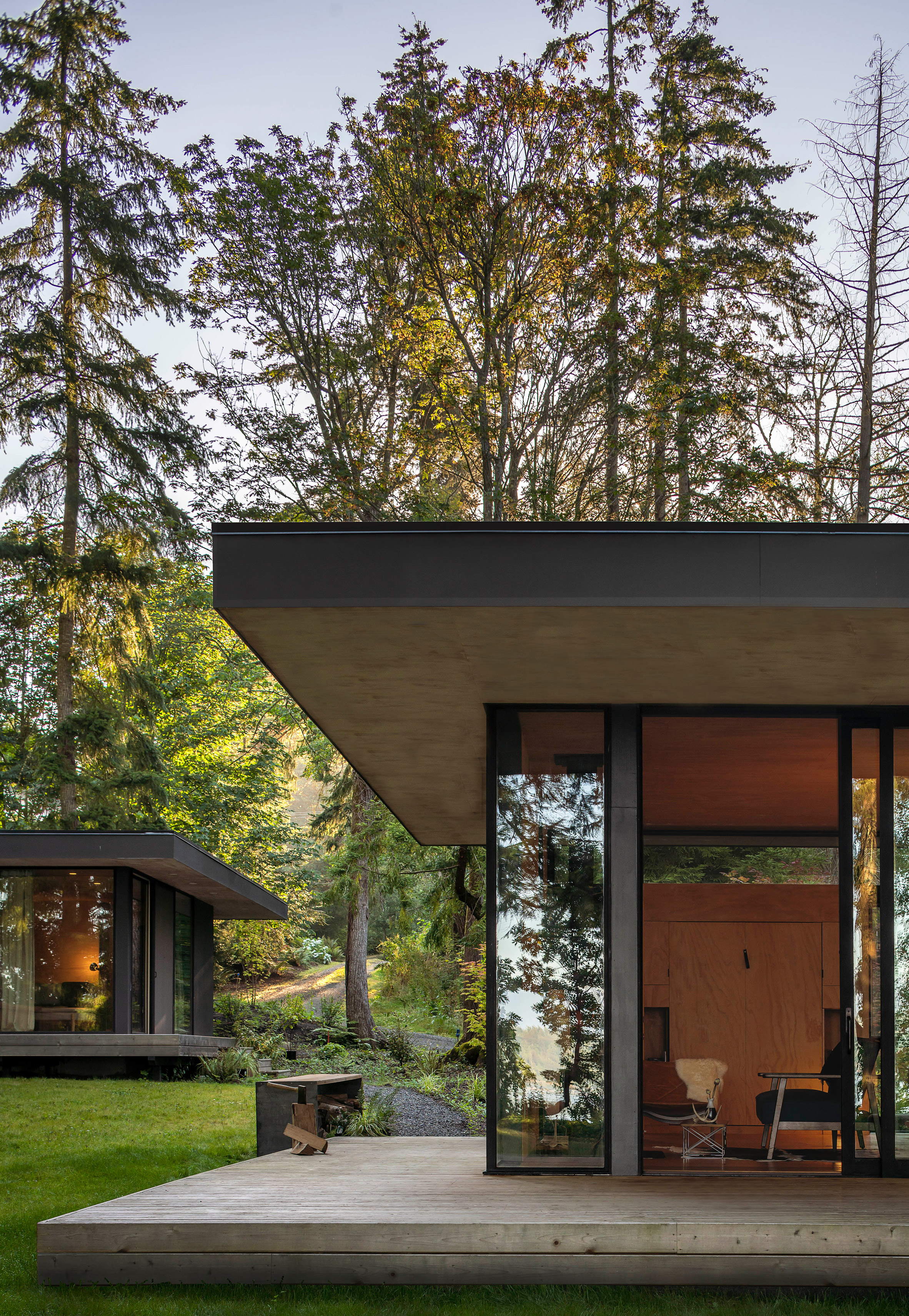 The Hood Cliff Retreat sits on a wooded site overlooking the Hood Canal, a natural waterway in the Puget Sound. The project, designed by Seattle firm Wittman Estes, entailed creating a main dwelling and detached bunkhouse that immerse the family "in the stillness of the forest".

The clients are a family of avid naturalists. Together, the parents have led careers in hydrology and forestry, and international wildlife photography. The couple's two grown children are natural resource scientists. 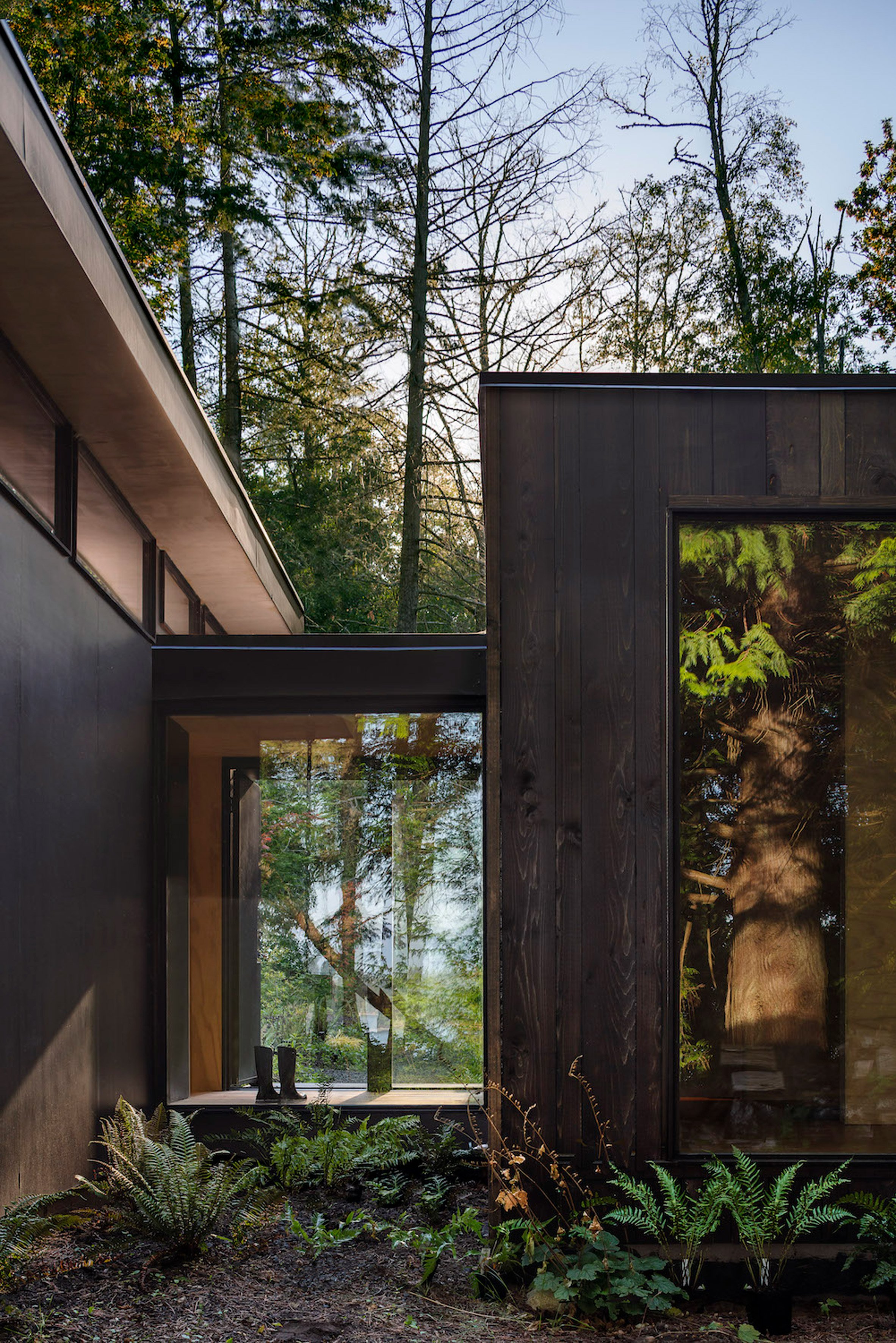 The family is spread out, with the parents based in Indiana, and their kids based in Toronto and North Carolina. The Washington dwelling serves as a place for everyone to come together and "celebrate their passion for being outdoors".

The retreat consists of low-slung, rectilinear volumes with overhanging roofs. The site was formerly occupied by a dark, single-room cabin built in 1962. While its concrete foundation and floor framing were retained, the small building was razed to make way for a larger and more transparent dwelling. The team used economical strategies throughout the project in order to reduce costs.

"Simple details and a restrained material palette kept the construction budget to a minimum," the studio said in a project description.

Exterior walls are clad in rough-sawn cedar and cement panels, both of which are intended to weather over time. Large expanses of glass bring in natural light and dissolve the barrier between inside and out. 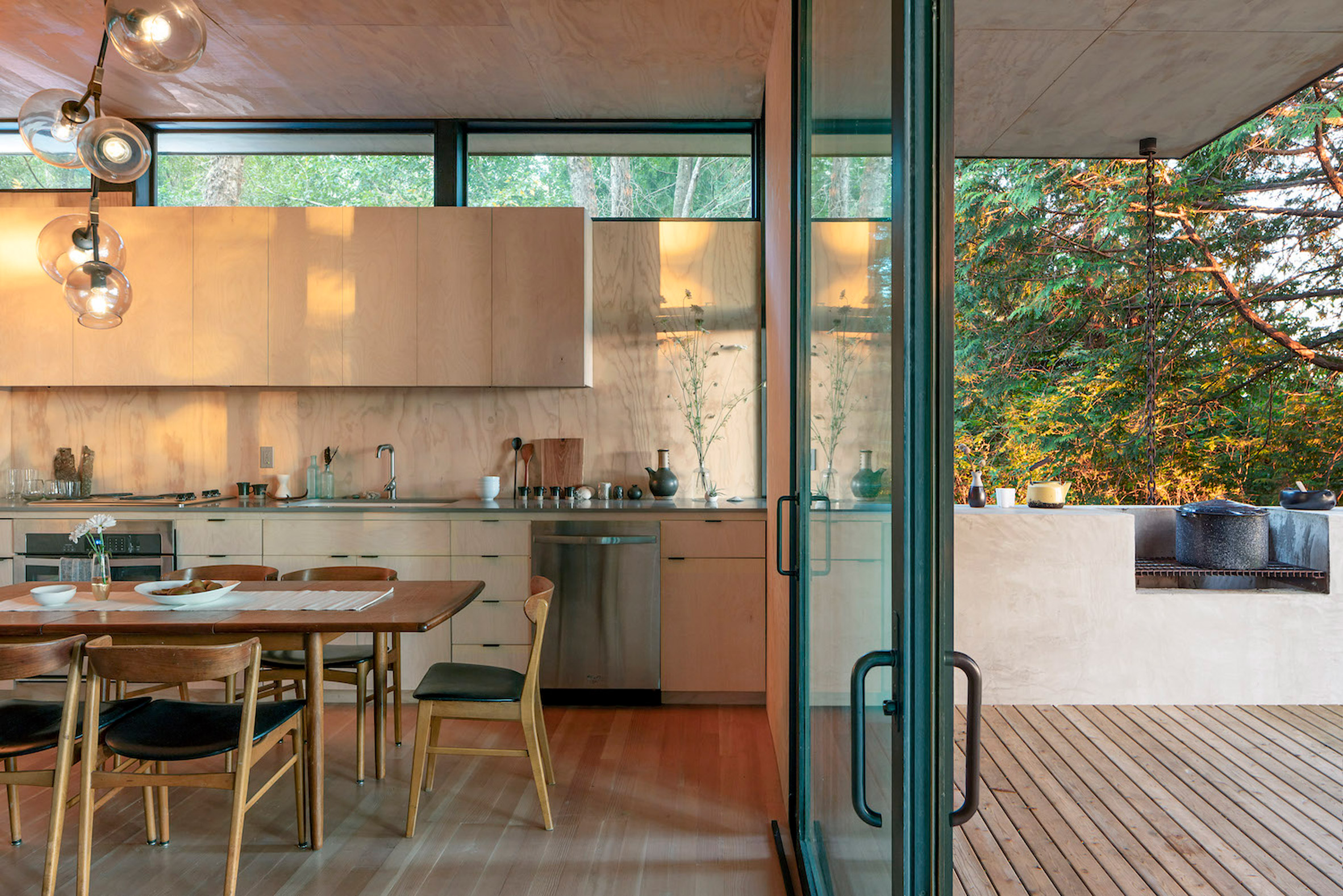 The main dwelling is roughly L-shaped in plan. The portion built atop the former cabin contains a living room and kitchen, along with a built-in Murphy bed that enables the public space to be used as a sleeping area.

The living space flows through sliding, glazed doors onto a wooden deck, which features a concrete counter with a built-in barbecue grill. A pass-through window allows the kitchen to merge with the outdoor cooking area.

The other side of the main dwelling houses more private areas, including a master suite. A gravel pathway connects the primary home to the bunkhouse, which contains sleeping areas, a bathroom and an outdoor terrace.

Warm and earthy materials were incorporated throughout the retreat. White oak floors are paired with walls and ceilings wrapped in pine plywood. Certain elements, such as countertops, were fabricated using wood salvaged from the old cabin. 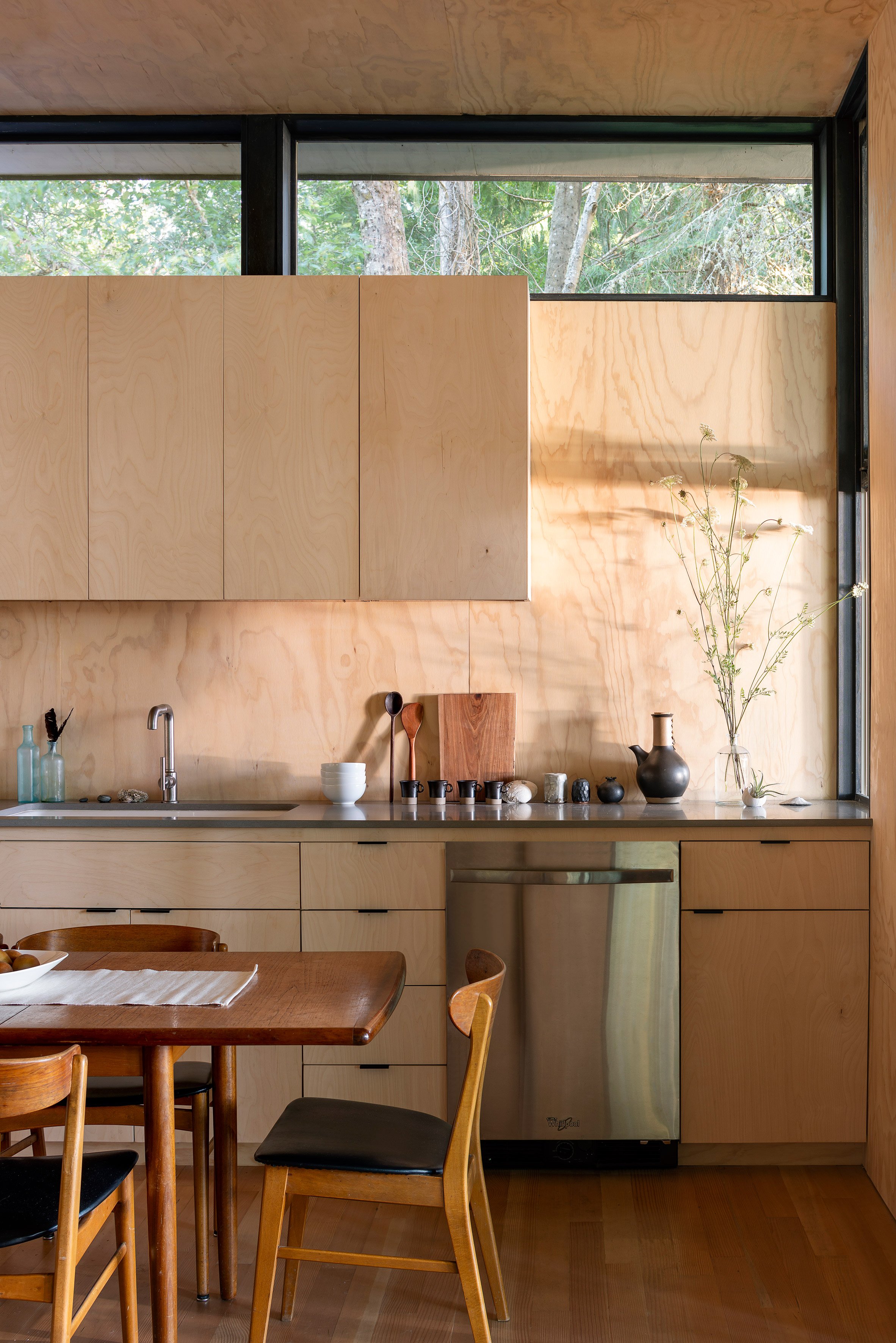 Rooms are furnished with contemporary decor, including a rocking chair by Hans Wegner and a small table designed by Charles and Ray Eames. In the master bathroom, a cast-iron tub adds a vintage touch.

Wittman Estes says the retreat balances an intimate connection to nature with a sense of being sheltered and protected. The team drew inspiration from the killdeer bird, a native species that has a unique strategy for constructing its nest. 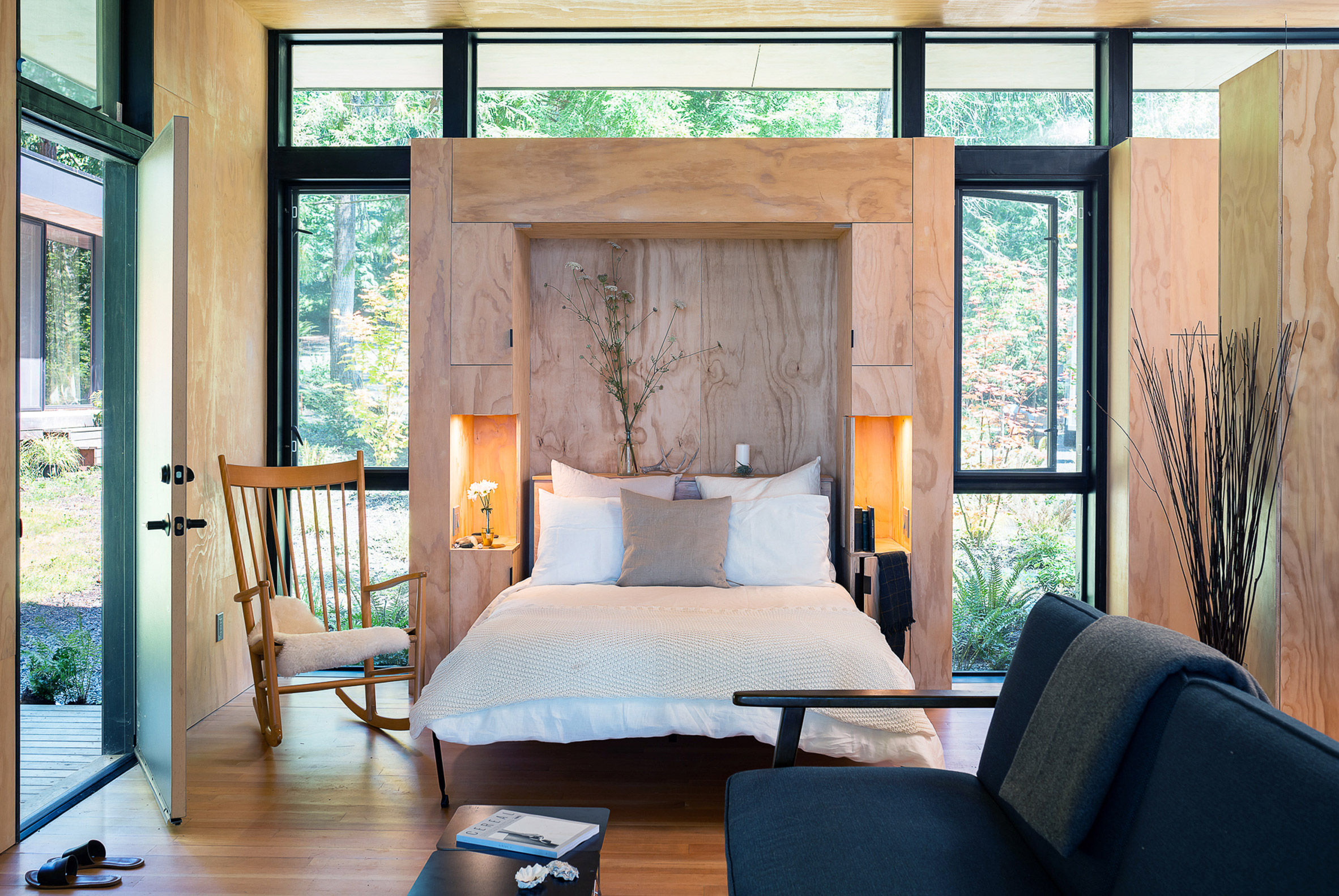 "Unlike most birds, the killdeer doesn't bring outside vegetation to build its nest," said architect Matt Wittman in a project description. "It pulls away the existing brush, burrowing into the existing forest and nesting on the ground."

"Hood Cliff Retreat seeks a similar relationship with the ground that feels both connected to and protected from the elements of nature," he added. 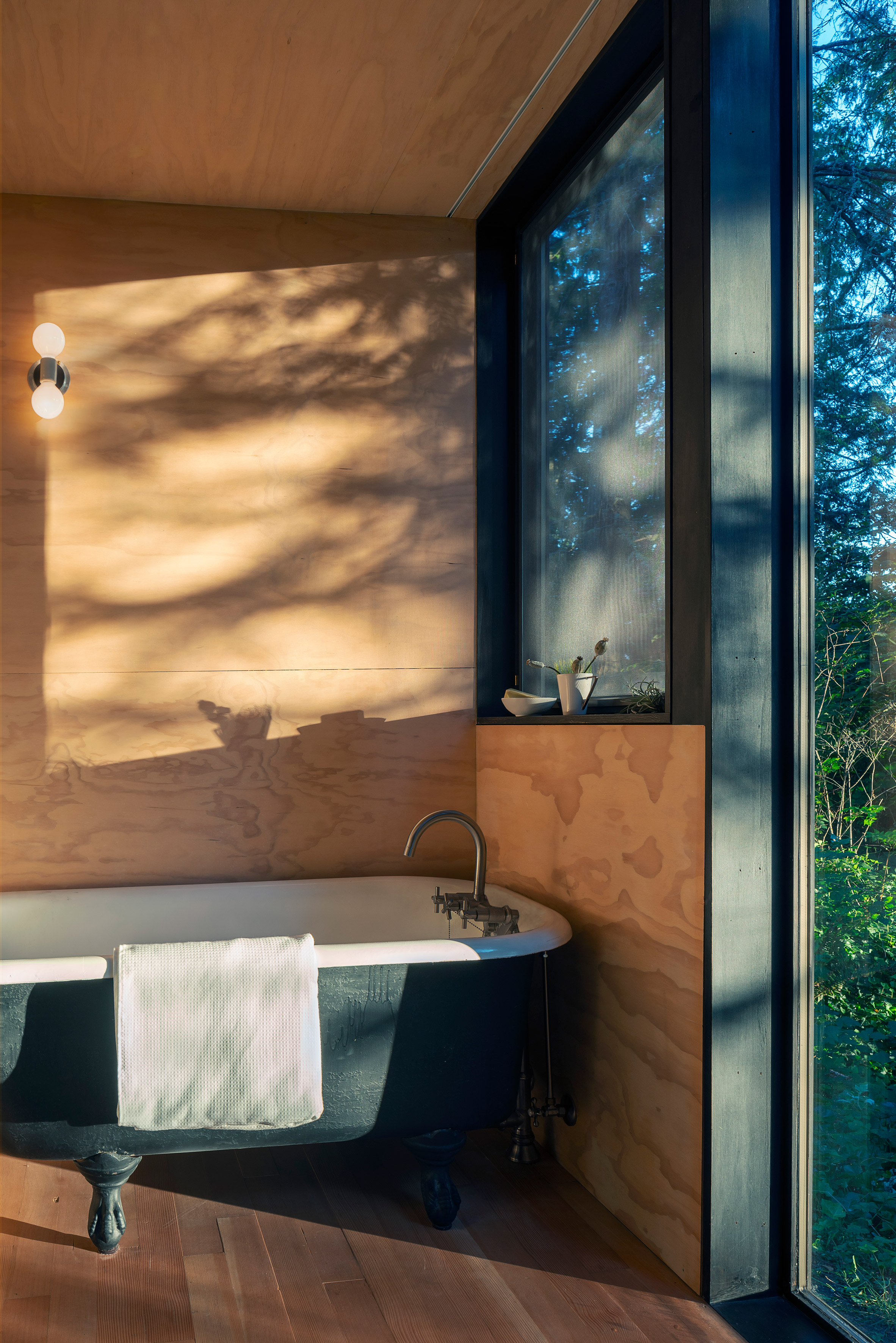 Wittman Estes was founded by Wittman and landscape designer Jody Estes. Other projects by the firm include a studio building and Chinese-inspired courtyard in Seattle that was added to a 1940s home.

The firm also designed a solar-powered, prefabricated accessory dwelling wrapped in charred wood, which was created in collaboration with the Washington-based company NODE.

Photography is by Andrew Pogue.